If you caught the Lavinia stamps shows recently on Hochanda tv you will have been smitten like me with the tiny but mighty Pipin the bunny stamp! In today’s project we see how even the smallest of feature images can take centre stage in some of our larger pieces. 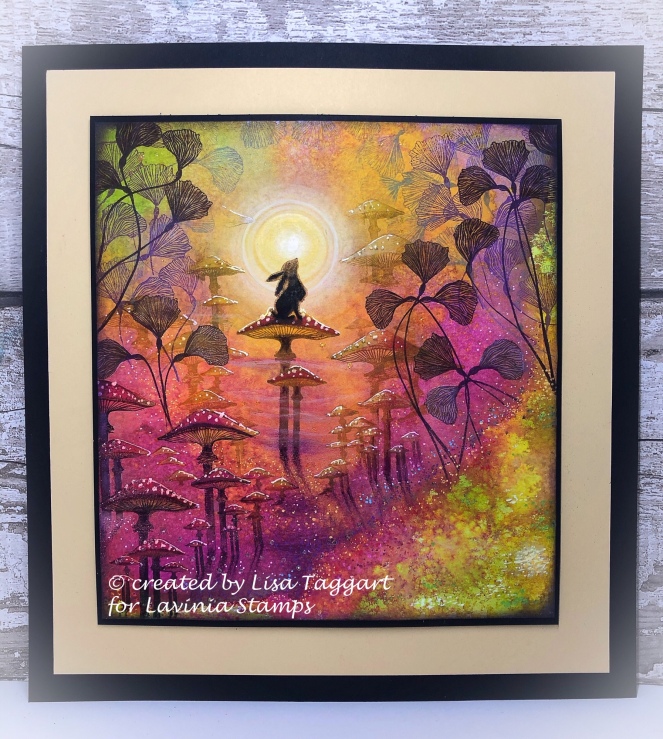 Here are the stamps used:

The process began as usual by creating a random inky background using a mix of brightly coloured ink sprays. Once sprayed on to the card and spritzed with water a clean dry piece of card is placed on top. When pulled apart two prints are revealed. I choose this one. I trimmed it down and could see that the light centre presented the perfect stage for Pipin. 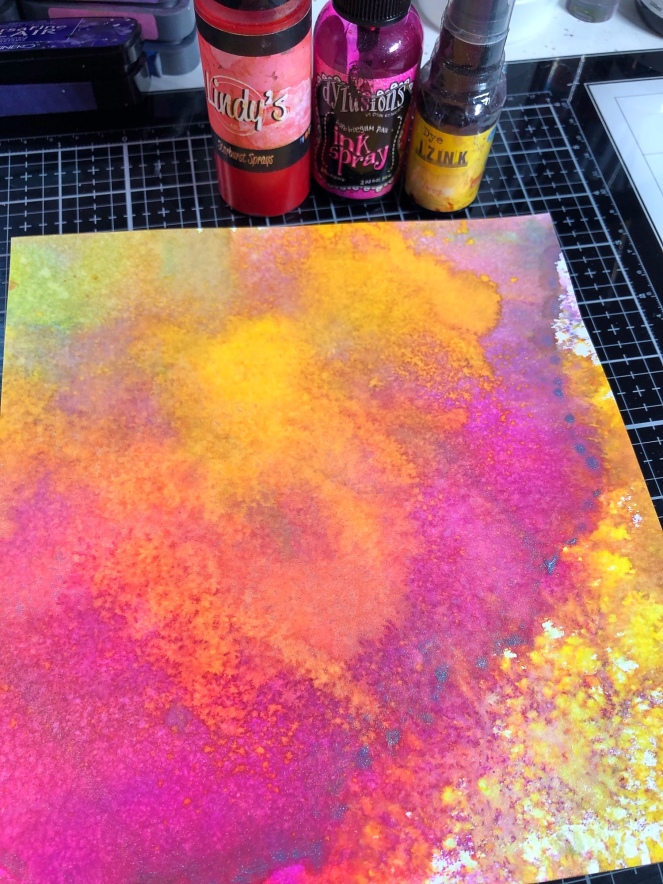 To create a light source and a focal point for Pipin, I added a circle painted in white gesso. I then used my pastel pencils to blend in some colour. 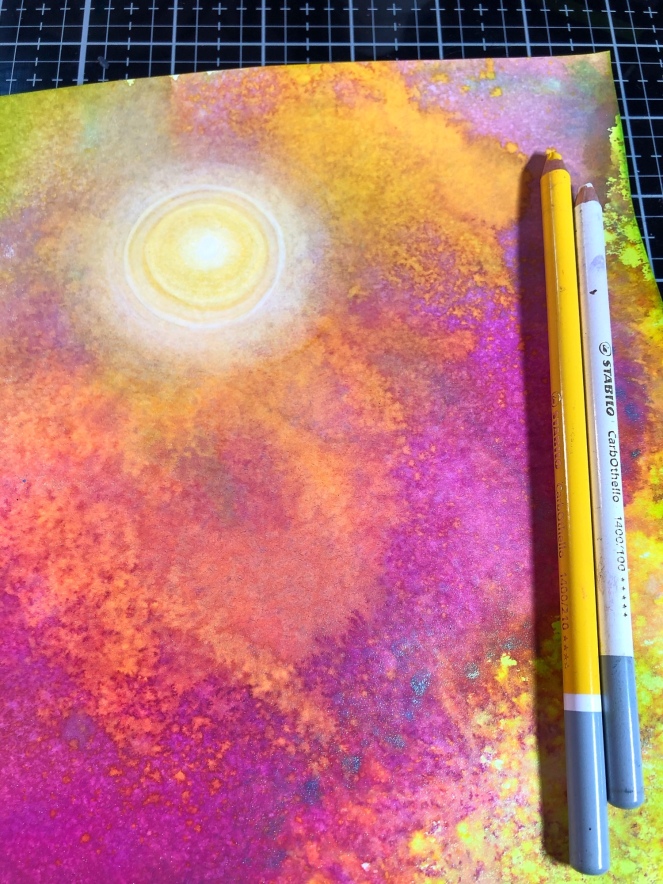 I created a mask from copy paper for Pipin. I stamped him in dark yellow Versa Claire ink. I placed the mask over the top and then stamped the mushroom in the same ink behind him and just under the sun. I used water colour markers to build up the colour on Pipin leaving his head fairly light. I added colour to the mushroom and a light shadow underneath using my charcoal and pastel pencils. I added spots to the mushroom using a white gel pen. 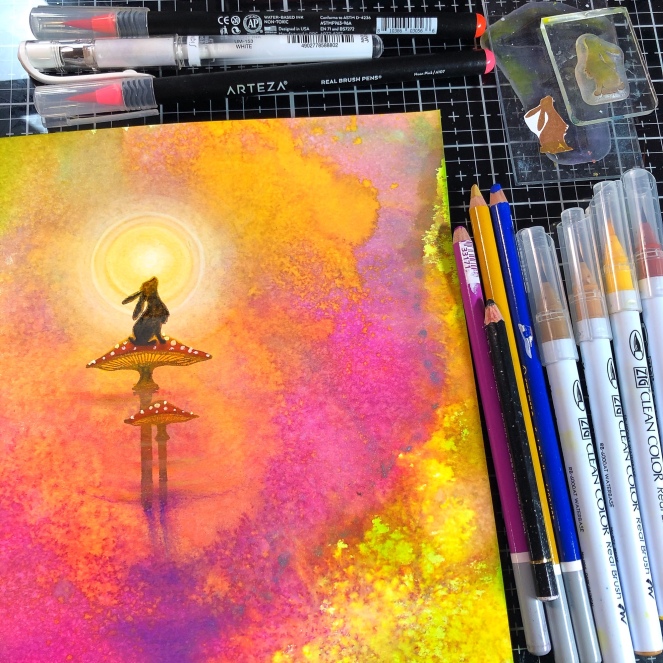 Next I built up the scene stamping the mushrooms a number of times in the same ink but this time, second generation ( having stamped lightly on copy paper first to remove some of the ink). I also stamped using only part of the stamp by wiping off the ink of the larger mushroom to create variety. I used the mini mushroom too. The stamping in this area was lighter because it would be affected by sunlight. I used pastel pencils to emphasise the light and added a few whips of mist across the stems. The same applied to the stamping of the orchids. As well as using 3 colours of purple from pale to dark depending on how close to the sun, I also twisted the stems into curves to add extra movement. Later I lightly coloured them using clear mica ink for a little sparkle.

The stamping of the foreground mushrooms was achieved using the dark purple ink and some of the techniques from above. The idea was to have something to draw the eye up to the focal point of the picture. I added white gesso to their tops so that I could create a neutral canvas for adding colour. To colour I used a combination of paint pens and pastel pencils. I also added dots of colour about the foreground using the paint pens. The highlighting was done using my white gel pen. If you look closely you will also see that I added a tiny eye and nose to Pipin using a fine black liner pen. 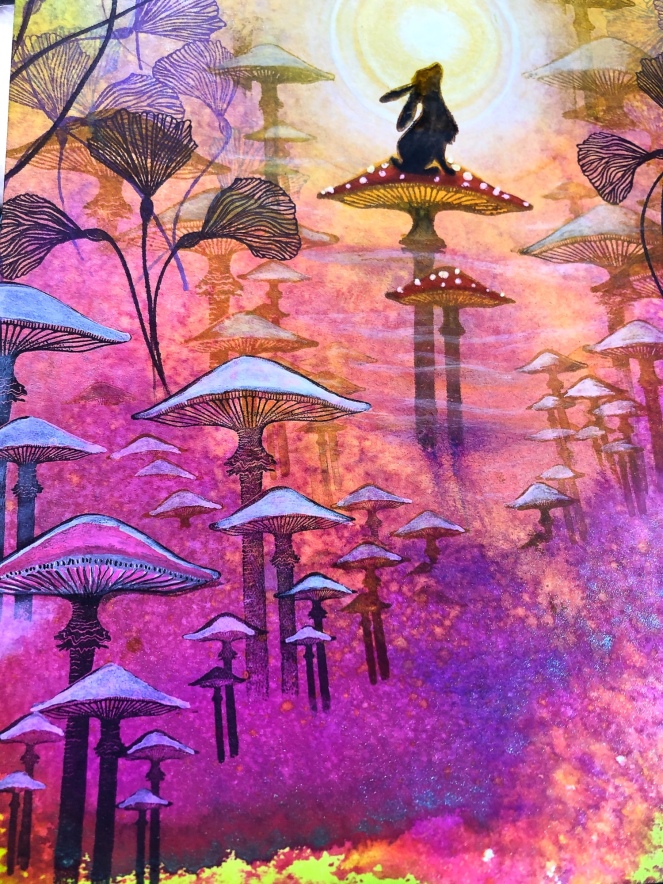 Finally, the glitter was added. 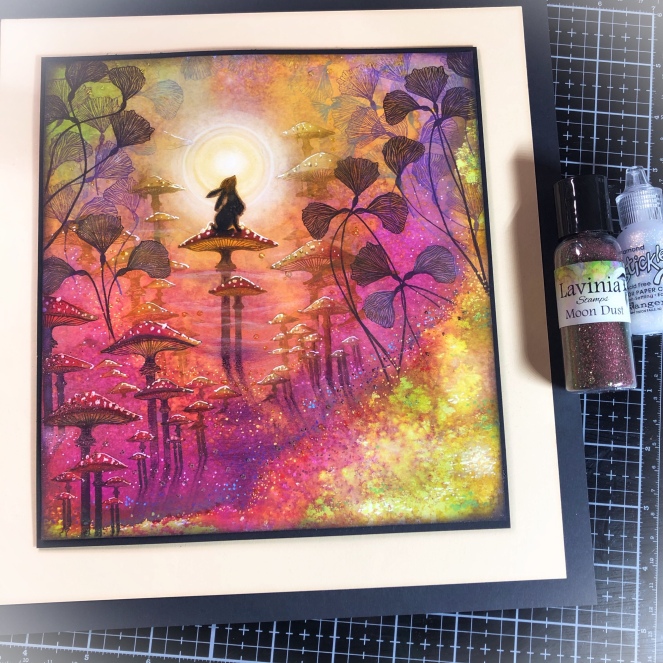 Pipin certainly looks like a brave little bunny basking in the sun in the midst of his magical mushroom landscape…but he would equally be at home on a small card with a tiny touch of colour.

5 thoughts on “Pipin the brave!”